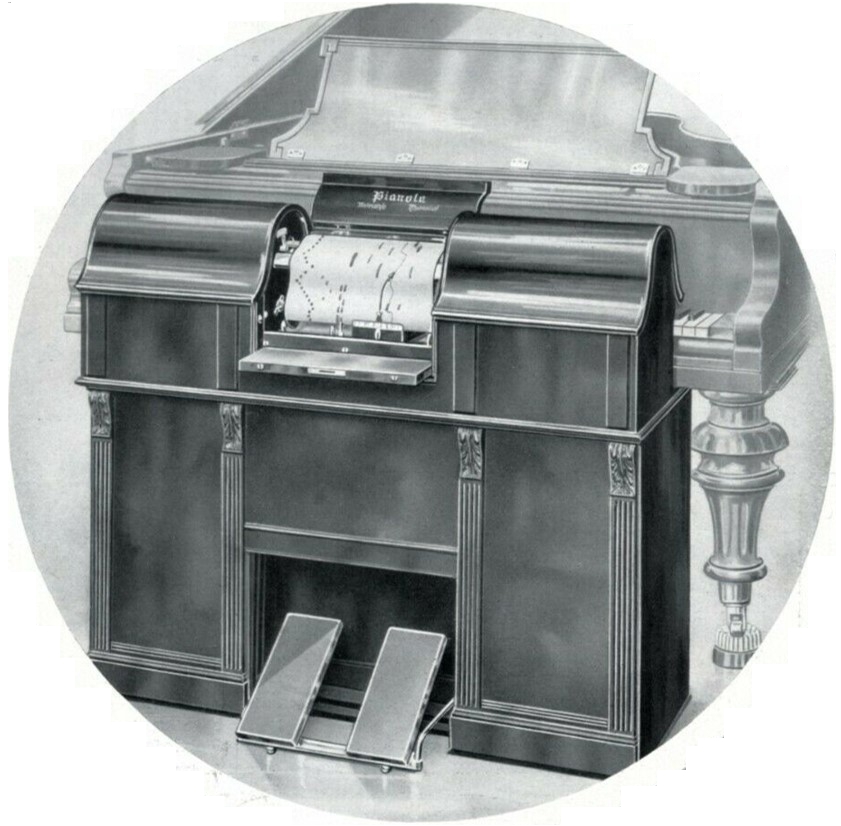 In the years before the 1914-18 war a challenge faced the British piano industry – the development, mainly in the United States, of the playerpiano. If the girls of 1840 had wanted music that was ‘brilliant but not difficult’, the girls of 1900 wanted music that sounded brilliant without the need for boring practice. With the suffragette movement came the first stirrings of female emancipation, and the daughters of the household were no longer prepared to sit quietly at home learning the accompaniments to drawing-room ballads.

It was often found to be the case therefore, that a hostess had to fall back upon the player-piano, when in the normal course of events she could have called upon one of her daughters to entertain her guests.

The player-piano concept was developed originally from the reed organ or harmonium. That worked on a system of air pressure, the player pumping at the pedals. Throughout the nineteenth century inventors were working at the idea of making a keyboard instrument sound on a pre-programmed system: it is, after all, the barrel-organ principle by which a cylinder studded with spikes activates the notes or (in the case of the hurdy-gurdy and similar instruments) the strings.

By the 1860s an American company had marketed an instrument named the Mechanical Orguinette. This was a reed organ, pedalled as usual but containing a paper roll, appropriately punched to sound the correct notes. The result tended to be noisy and loud, since the air-pressure required was considerable. But the device was successful enough for the company to try and apply it to the piano. In 1897 an American inventor, S.S. Votey, patented a mechanical piano which he called the ‘Pianola’- The invention and the name were taken up by the Aeolian Company of New York.

A claimant to the title of inventor of the piano-roll was a Scot, John McTammany, who died at the age of seventy in 1915. Taken to America when a child, he is said to have conceived the idea of the piano-roll while in hospital with war wounds (presumably the American Civil war). He gave a public showing of his invention in 1876 but could not raise the money to develop it, and a number of manufacturers then took it up.

The Aeolian Company was the most successful, in Europe as well as the United States. A London showroom was opened in Regent Street, London in 1899. and the Pianola sold well under the slogan ‘So simple a child can play it’. The Aeolian Company had a head start in Britain largely due to the conservatism of British piano retailers; they refused to believe that this new-fangled invention would catch on, until they saw the business results of the player-piano companies. Patents flooded in like confetti, for player-piano improvements and the innate reserve of the retail trade and the piano tuners wilted under the popular success of the new instrument.

The main improvements in the player-piano were of two kinds: devices to enable the player to add expression to the necessarily mechanical performance of the player-rolls; and following on this, the emergence of piano-rolls made by distinguished pianists. There is (or was) an enormous amount of music available on piano rolls and much more was cut for ordinary players than for reproducing pianos. For instance, the 1932 Aeolian catalogue lists about 1500 Duo-Art rolls but twice that number of Metrostyle – Themodist rolls. The Hupfeld Company too, offered a very extensive catalogue of serious piano roll music under the Animatic label.

Another vast repository of music is the 65-note piano roll. From about 1910 onwards most players and piano rolls were capable of playing the full 88-note compass of the standard piano. During the first decade of the century, however, player actions utilizing only the middle 65 notes of the keyboard were commonplace. These 65-note rolls are completely incompatible with 88-note players and consequently during the past 70 years they have been thrown away by the cartload. This is a great pity because much obscure but interesting music cut for 65-note rolls was never transcribed to 88-note rolls.

Several years ago the pianist Leslie Howard gave a series of piano recitals on BBC radio entitled “The Undiscovered Piano”. In these programmes he concentrated on showy concert pieces and salon music, popular in Victorian and Edwardian times, but now almost completely forgotten. Many of these compositions are well worth an occasional airing and a lot of them can be found on piano rolls. I will mention just one from my own collection. It is an enormous 65-note roll of Variations on “Rule Brittania” written by Wagner when he was a young man (or so the roll leader states). Alas, I cannot say whether it is a worthwhile piece of music or not, because along with a large number of other 65-note rolls it languishes in a cupboard, waiting for me to finish the rebuilding of a 65-note player. This is a project whose completion date seems ever to recede into the future.

Fortunately, the restoration of player pianos these days is not as difficult and mysterious as it used to be. There is a considerable literature available on rebuilding techniques; several companies specialise in supplying replacement materials and parts and one can even purchase reprints of player piano service manuals.

Personally, I feel that the above question is of little importance. The player piano enables ordinary persons, with a love of music but no technical ability, to participate personally in a performance. The sensation of playing a piano roll is utterly different from merely playing a gramophone record; one can become involved in the music. Several player enthusiasts of my acquaintance have confided to me that, out of their collections of Weltes, Ampicos, Duo-Arts and so on, the piano that they enjoy playing most is their ordinary pedal player. The playing of a showy, brilliant concert piece may be hell for the rest of the family, but for the player pianist it can be a uniquely satisfying experience.