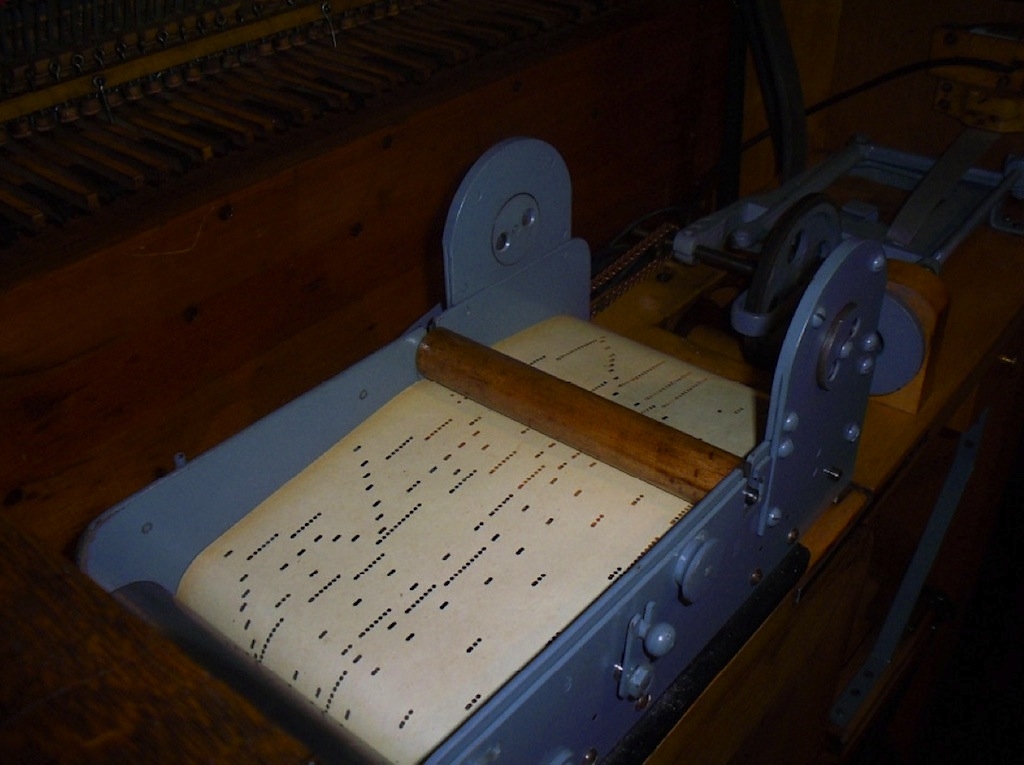 We are all familiar with the basic player piano, using conventional bellows feeders, paper roll music, pouch operated valves of both primary and secondary variety, and suction pneumatics which operate the piano action. Self-playing pianos have been around for over 150 years, in various guises, and have been subject to development over that period. Early systems were pretty crude and fully mechanical, not having the benefit of pneumatics, but these were superseded by pneumatic systems of a multitude of types. Inventors came up with designs involving both suction and pressure, and sometimes both within the same assembly, in order to create the most lifelike performance. Music could be stored as holes in paper rolls, cardboard rolls, cardboard discs or books or even endless bands. During the golden age of self-playing piano development inventors were vying with each other to invent something new and commercially successful.

The Pianolin was a very early entry into the American market for coin-operated electric pianos, designed for public places. These were not domestic instruments but were designed for the rapidly developing market of bars, ice-cream parlors (sic) and especially brothels. They produced live music for any occasion and are really the predecessors of the juke box: indeed, some manufacturers of coin pianos went on to become famous manufacturers of juke boxes, such as Seeburg and Wurlitzer. The North Tonawanda Musical Instrument Works was set up in 1906 by a group of workers from the Eugene de Kleist Musical Instrument Manufacturing Company, also based in North Tonawanda. Two years later, de Kleist was taken over by Wurlitzer. The new company became a major manufacturer of what the Americans call band organs, but we know of them as fairground organs. North Tonawanda also saw a potential market in the developing field of coin-operated pianos. Due to their background in organs, the new pianos incorporated many similar features. 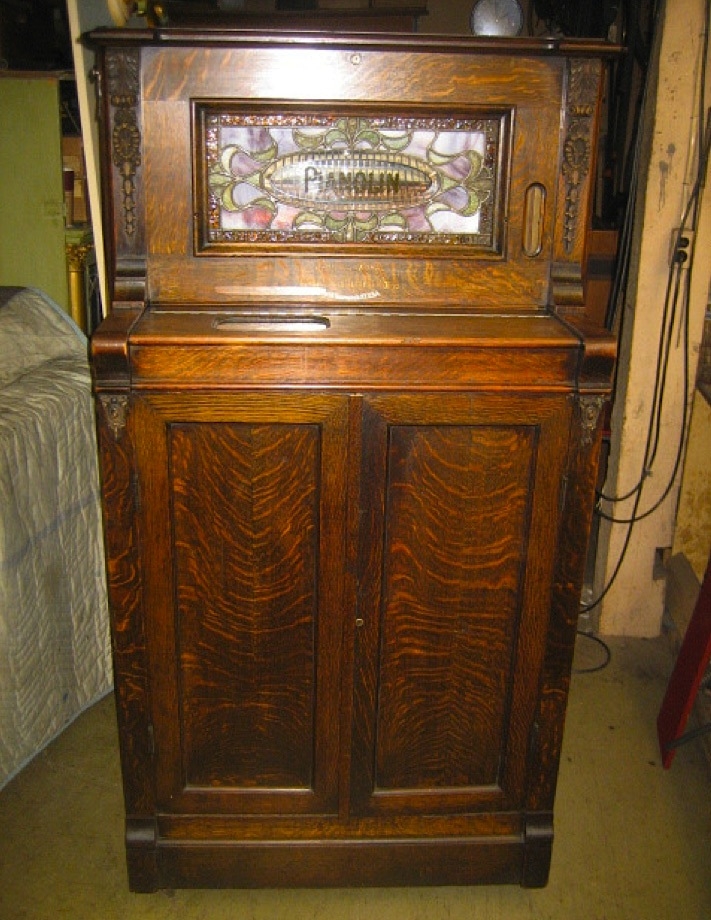 The Pianolin is a small cabinet piano without a keyboard, and was made from 1906 to around 1915. It contains a small piano frame comprising only 44 notes. The 44-note piano crops up in a number of early cabinet instruments, such as the Wurlitzer Pianino and the Mills Violano Virtuosa. The reason for using 44 notes is not clear, but maybe it’s because half a piano is better than none at all! Anyway, with a fully chromatic 44-note scale you can get a reasonable performance without noticing any shortcomings at the two ends of the musical range. This one has the rare art glass which is illuminated from the rear when the piano plays. More usually, the window has plain glass plus the Pianolin decal. Most early coin pianos, or nickelodeons as they became known retrospectively, comprised just the piano, which usually had the addition of a mandolin rail to give the ‘honky tonk’ sound, plus sustain and half-blow controls. There was rarely any pneumatic expression – the type of music, played in public places which could have a loud atmosphere, just didn’t warrant such sophistication. Some pianos also had the addition of either a xylophone or organ-pipe rank as an extra instrument in the melody section. Most such instruments use a register-controlled section of around 25 notes in the upper musical range, playing along with the piano when switched on or off by holes in the paper roll. Larger pianos also incorporate percussion effects and multiple pipe ranks.

The vast majority of American band organs used multi-tune paper rolls, rather than the European system which used folded cardboard books. The latter are much more durable but considerably more space-consuming and heavy. This design of paper roll was read across into the coin piano industry, with most pianos having well-designed roll frames incorporating a large roll of usually ten tunes. This was fully automatic and played one tune for each coin inserted.

The main drawback was that there was a long gap in the music when the roll was rewinding. In order to overcome this problem, some manufacturers developed an endless roll system. The leader in this design was North Tonawanda. With good design, they produced a system that can play tunes continuously, without break, and without any damage to the paper.

The downside is that this takes up much more space than a roll mechanism and in such a small case it allows a roll of only six-tune length, compared with ten for a standard roll. The roll is pulled across the tracker bar by a knurled roller at the left-hand end, with the paper held firmly against it by a heavy steel roller. The drive roller is chain-driven from the speed-controlling mechanism, which comprises a rubber-tyred wheel running on a wooden cone. The speed is adjusted by manually changing the position of the wheel along the cone. The roll is also more susceptible to damage when being changed, and this takes longer than changing a roll in a conventional piano. In spite of these shortcomings, the Pianolin lasted for about a decade. Firms such as Wurlitzer, Seeburg and Operators, however, took the lion’s share of the business and lasted well into the twenties. One other endless-roll-playing piano worth mentioning here is the Link, which was made into the late twenties. These used a much longer roll, playing up to 15 tunes, which was housed in a compartment stretching the full width of the piano, usually along the top. 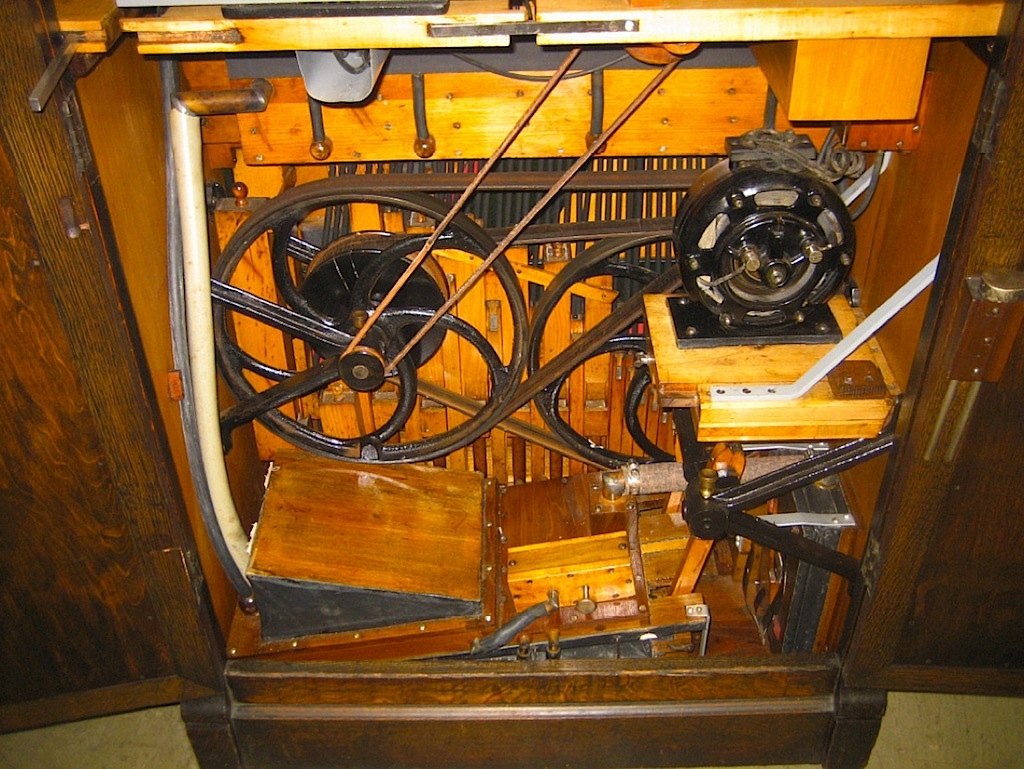 Rather than use a short rank of around two octaves of organ pipes, North Tonawanda incorporated a full rank of 44 organ pipes into their Pianolin. This was quite an achievement, given the small size of the case. They comprise 13 stopped flutes and 33 open violin-toned pipes. These all play from a single chain perforation register, which unusually uses the punched hole to turn off the pipes. The original electric motor can be seen, driving through a double reduction of flat belts to the crankshaft. A round leather belt comes off the intermediate shaft upwards to drive the previously mentioned cone pulley for the roll drive. At the bottom is a pair of double-acting feeders which pump air from the suction reservoir, positioned directly above the feeders, and into the smaller pressure reservoir to the right. The feeders are ribbed to ensure they do not blow out when feeding pressure. The organ pipes can be seen directly behind the belt drive. The design is a wonder of close packing but this makes maintenance and tuning of the pipes very difficult. Imagine trying to tune the pipes whilst the pump is running, and they cannot be accessed from the rear as the piano soundboard is in the way. The pipe chest sits on the floor of the case and is tubed down from the main stack above.

The piano is of conventional form, with an iron frame and is strung in bichords in the bass and trichords above. The mandolin rail can be seen running across the entire width and has leather strips capped with metal clips which are interposed between the hammer and strings when required. The mandolin is not used in the bass. 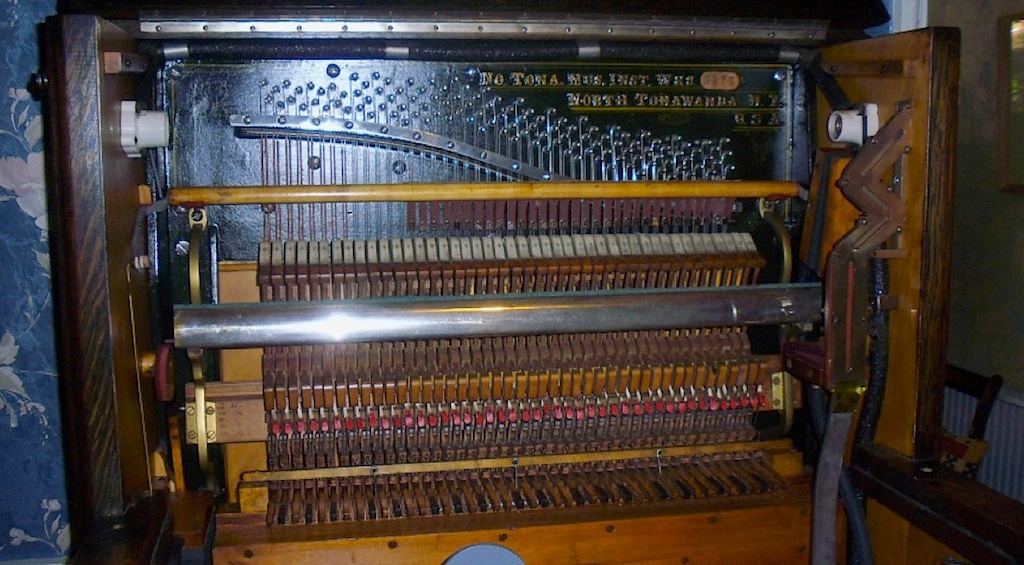 The action is fitted with sustain and half-blow functions. It is operated in the usual way from the stack below, but is fitted with a set of small levers to aid tuning. These are stained black where required to replicate a piano keyboard. The coin slot and switch can be seen to the right.

This instrument was imported from the USA a few years ago. It still retains its original electric motor and wiring. Both the motor and wiring appeared to be in good order and I took the decision, against my normal practice, to retain the wiring. The lights, switch and motor wiring are in a single loom which is built into the case and would necessitate a major strip if it were to be replaced. An electrical check proved it was safe to retain. I installed a 240v/120v transformer in the rear of the case with a rating of 500VA which would be more than adequate. The only other area requiring change was the motor drive pulley. The motor will now be running at 5/6 of its original speed, due to the UK mains alternating current being at 50Hz rather than the USA figure of 60Hz. I simply made a new flat belt pulley 6/5 times larger than the original. The original is stored in the bottom of the case ready for a future owner, should it be repatriated after it outlives me. A final novelty in the electrical department is the coin trip switch. The coin itself completes the electrical circuit to operate both the motor and the lights. The vertical slot acts as an accumulator, storing coins waiting to be used. At the end of each tune a pneumatic causes the coin to be ejected downwards into the coin box and the next one comes into play.

So, in conclusion, we have a cabinet piano without a keyboard, only 44 notes, an endless music roll, a full complement of organ pipes and a rather dangerous looking switch. The end result is a lively and rather loud automatic instrument, something a bit different from a pianola.