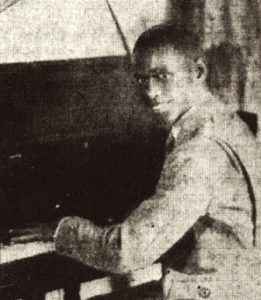 In August 1923, QRS launched its rolls on the race market in earnest. Newspapers in Baltimore, Chicago and New York carried adverts proclaiming that ‘seven well-known Negro composer-pianists have been added to the QRS corps of recording artists thereby insuring for its patrons a still larger variety of unquestioned interpretations of Negro music’.

The best-known of these pianists was, naturally enough, James P. Johnson; but the others included Luckey Roberts, Fats Waller, J. Lawrence Cook and one of the biggest stars of the moment, Lemuel Fowler.

Although Fowler is little known now, his story has many parallels among modern pop stars. He was a one-hit wonder, rising suddenly from obscurity after writing a hit song. He then worked in the music business for several years before fading back into obscurity. Fowler was an important blues-based pianist who, through his recordings, influenced boogie-woogie pianists such as Mead Lux Lewis, a song-writer and a self-confessed perjurer.

In 1922 Fowler wrote one of the hit songs of the year. ‘He May Be Your Man (but he comes to see me sometimes)’, which was recorded by at least six different artists. By 1923 he had a flourishing recording career, both on wax cylinder and piano roll.

Fowler, to judge by his photograph on the QRS advert, was roughly a contemporary of Johnson and Cook, who were born in 1893 and 1899 respectively. Fowler grew up in the Chicago area and, along with Jimmy Blythe and Cripple Clarence Lofton, was one of the piano-players that the young Meade Lux Lewis later recalled listening to.

He seems to have moved to New York in the early 1920s and in 1922 sold the copyright on ‘He May Be Your Man’ to Perry Bradford, who was based there. Bradford (who was known as ‘Mule’) was one of the key figures in the commercial development of jazz. Fowler’s legal problem stemmed from the fact that he had already sold the rights on this song to the Chicago-based Ted Browne Music Company.

This was not an uncommon practice. During the 1920s, music publishers ripped off musicians – and especially poorly educated black ones – by paying derisory sums in exchange for all the royalties from their compositions. The musicians, for their part, often sold the same songs to different publishers. There are stories of songwriters peddling their wares around Tin Pan Alley, selling the song in one office, changing the title page and selling the same song under a new title in the office next door. The stories may be apocryphal, but they are grounded in truth.

Normally this was only a serious problem if the song became a hit, as was the case with Fowler’s song. The result was that Ted Browne sued Perry Bradford for the royalties. By the time the case came to court there was $10,000 at stake, which gives some idea of how popular Fowler’s song was. Both Fowler and another pianist-composer, Spencer Williams, testified on Bradford’s behalf. But the local newspaper The Clipper, later reported on 31 January 1923: ‘Williams and Fowler admitted that they had committed perjury and made false affidavits at the instigation of Bradford.’ As a result, Bradford was sentenced to jail for four months.

It was not the first time that Bradford had copyright problems. The blues craze began in November 1920 when the singer Mamie Smith recorded ‘Crazy Blues’, a tune that was written by Bradford, who was an indifferent pianist. The song was an immediate hit. Eubie Blake later recalled a stunned Bradford sitting on the kerb holding a cheque for the first three months’ royalties: it was for $100,000!

In 1921, a song-publisher called Frederick V. Bowers gained an injunction ‘restraining Perry Bradford, the colored song writer and publisher from publishing and selling the song “Crazy Blues”‘ and also asking that thirteen mechanical companies be ‘restrained from paying Bradford royalties on the song.’ The ‘mechanical companies’ were, of course, piano-roll manufacturers.

The success of ‘Crazy Blues’ prompted many companies to start promoting their music at the race market. The 1923 QRS advert refers grandly to ‘a special department, through which the characteristic music of the negro race would be made available for the player piano and recorded by artists of their own people thus insuring authoritative interpretation.’

Although the penalty exacted from Fowler for perjury is not known, it clearly did not impede his musical career. Throughout 1923 Fowler was exceptionally busy. Fowler’s first piano roll ‘The Wicked Fives’ was issued by US Music, in March 1923. His first roll for QRS, ‘You’ve Got Everything a Sweet Mama Needs But Me’, was issued in May 1923. In the same month he recorded two sides with the blues singer Helen Baxter for Columbia. In July 1923, he recorded his only two solo 78s, again for Columbia. One of the two titles, ‘Satisfied Blues’, he also recorded on piano-roll for both QRS and US Music. QRS issued its roll in September 1923, US Music a month later.

Over the next four years Fowler recorded a further 18 sides for Columbia, with his own band. The best-known of these outfits is probably Lem Fowler’s Washboard Wonders, which featured Sidney de Paris on trumpet. Fowler was also an accompanist on some 30 recordings by mostly second-division blues singers, largely recorded for the Columbia and Gennett labels. He recorded at least 20 piano rolls – 15 for QRS and 5 for US Music. His piano rolls were recorded in two waves (to judge by the release dates of those that survive). Half-a-dozen rolls were issued in 1923 when he was at the height of his fame. There was then a four-year gap before any new Fowler rolls were issued. US Music, which was by then owned by QRS, did not issue its roll of ‘He May Be Your Man’ until September 1928. All these recordings, both 78s and piano rolls, were made in New York. He is also said to have recorded rolls on the International label.

By the late 1920s the fashion for blues was on the wane. Fowler’s last 78 was recorded in July 1927. It is possible that he made an arrangement to cut rolls for QRS to compensate for the end of his wax recording career. His last piano roll was issued by QRS in January 1932. He then dropped out of the music business.

Fowler was not the only blues-based pianist to drop out of music at the end of the 1920s. The depression was a tough paymaster. Record and piano-roll companies went bankrupt. Meade Lux Lewis, who made his first recording of ‘Honky-Tonk Train Blues’ in 1927 also dropped out of the business. Several years later, John Hammond went looking for Lewis and eventually found him washing cars; but there was no Hammond to go and rediscover Fowler and the fashion for boogie-woogie – which Fowler’s blues-based style was well-equipped to take advantage of – passed him by.

Fowler apparently continued to live in New York. J. Lawrence Cook, who doubtless edited some of his rolls at QRS and would presumably have known him reasonably well, bumped into him in New York in 1961. It is unlikely that he is still alive – he would have to be about a hundred. He probably died around the time that interest in his music was reviving. It was bad timing.