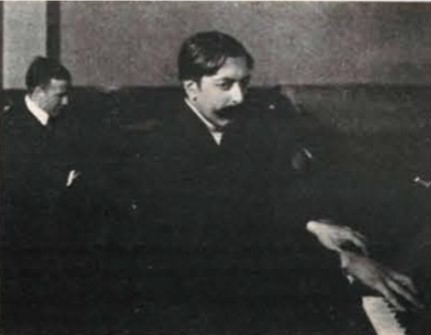 Famous Spanish Composer Plays Several Selections for the Aeolian Co. Is Enthusiastic Over the Accurate Reproduction of His Own Technique on the Duo-Art Pianola.

The Aeolian Co., New York, carried a remarkable advertisement on Sunday, featuring an interview with Senior Granados, the eminent Spanish composer, relative to the Duo-Art Pianola. Senor Granados is an officer of the French Academy, a member of the Legion of Honor, an intimate friend of Spanish royalty. He is the composer of the first thoroughly Spanish opera ever written and the composer of the first opera (produced recently at the Metropolitan Opera House) which was ever sung in Spanish outside of Spain. Senor Granados recently recorded a number of selections for the Duo-Art library, and his enthusiasm regarding the fidelity which characterized the Duo-Art reproductions of his playing and his keen delight with the Duo-Art Pianola are outlined in the following interview, published in Sunday’s newspapers:

“Senor Granados, the distinguished Spanish composer, sat – a dark, slight, intense man – listening to one of his own piano performances reproduced on the Duo-Art Pianola, exactly as he had played it a week before. The notes were rippling upon the keyboard as if touched by unseen hands – now falling lightly as leaves, now charged with indescribable spirit and power. 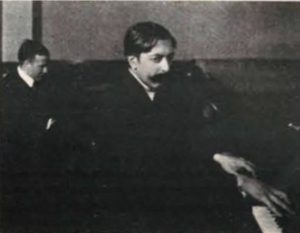 “It was a dramatic moment – that in which I first saw him.

“That picture I can never forget.

“As phrase by phrase this radiant music swept along Granados’ face was rapt with wonder and delight. Now he would listen motionless; now – as if it were impossible to contain himself – his fingers would move as if they danced along the keyboard. Now his head would sink within his hands; now it would be raised in sheer amazement of delight. * * *

“‘Mon Dieu, it is my portrait!’ he exclaimed.

“His exquisite ‘El Pelele’ ceased. ‘Senor Granados,’ I commenced, ‘would you call that a perfect reproduction of your composition? Does it match your own original performance in every subtlety and shade?’

“‘Is there even the slightest suggestion of the mechanical in this reproduced performance?’ I asked. ‘Please be very frank.’

“‘Nothing – nothing!’ There could be no question of his earnestness. ‘It is all so truthful, so life-like, so exact a replica of my very touch that my pupils themselves in Madrid could detect no difference.’

“He paused, and after a moment he said, ‘Yes, it is so human, so personal to me that, as I have listened to it in a darkened room, I seemed to see myself sitting at the keys. I seemed to feel the very touch of the keys in my finger tips. * * * So perfect even do I conceive this instrument that I think that those who knew some pianist in his lifetime could almost visualize him once again – call him to very

sight through the tremendous suggestion of himself which rises in rhythmic utterance from the music roll that unfolds his art through the Duo-Art Pianola. * * * To me it is a wonderful fairy story come to reality.’

“‘But do you not admit, Senor, a certain prejudice by musicians against all pianos which are not played in the accustomed way – by hand?’ I asked.

“‘I admit that such a prejudice existed once,’ replied the great composer thoughtfully.’ I admit even to this prejudice myself – once. But that time has gone. No prejudice can live in the hearing of this instrument. Its expression is equal exactly to the expression of the artist who made the record roll. As well might one be prejudiced against his art itself!’

“‘But, as apart from its ability to reproduce the artist’s rhythmic characteristics or his touch,’ I inquired, ‘is its tone everything that could be desired from a piano?’

’”‘The tone of the Duo-Art Pianola,’ replied the composer of ‘Goyescas,’ ‘is exactly the tone of the piano which is played by hand and possesses no Pianola additions. Let me even say this: So artistically admirable in every way do I conceive this instrument to be that I would have no hesitation in receiving it into my own conservatory of music in Barcelona!

“‘And now, just one thing’ – his finger rose to emphasize his words.’ Let me speak of the remarkable ideals which must have guided the company which could evolve such an instrument. It suggests to me the spirit of an artist with his work—an artist who is never satisfied with less than perfection.

“‘The Aeolian Co. must be like that. For whatever may secure mere commercial success, nothing can secure such truly artistic accomplishment which has not for its basis the highest artistic ideals, as well as the courage to achieve them. “‘I honor them for it. And I consider they have achieved for music art in this Duo-Art Pianola an enduring monument whose magnitude can scarcely be realized.'”