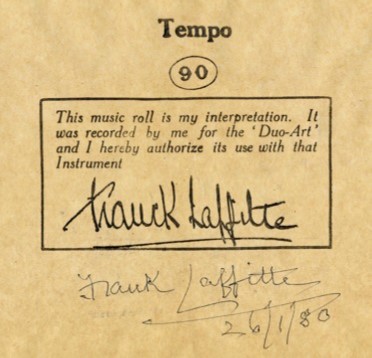 Equinox is the title of a piano piece written in 1922 by John Ireland. It is of great rhythmical complexity, with quintuplets in the right hand set against many different metrical divisions in the left. The overall effect is fascinating, though elusive. Eric Parkin, who recorded the piece in 1977, wrote: ‘its relentless right-hand figure and restless left-hand arpeggios make it a devil to play’. Here is a short sample:

It appears that the first-ever recording of Equinox was for the Duo-Art piano, made by the English pianist Frank Laffitte (1901-1982) in the late 1920s; taken down by Reginald Reynolds, it had the number 0350. This remained Laffitte’s favourite of the several English Duo-Art recordings that he made, six of which were eventually published.

On completion of the editing process, the Duo-Art pianists autographed their roll performances as a record of their authenticity. It has rarely happened that an artist is called upon to autograph a roll twice, but that is what happened here.

Sylvia Medcraft, whose transcribed telephone conversation with Robin Cherry appeared in the 60th Anniversary Edition of the PPG Bulletin (No. 219, Autumn 2019), wrote of this recording in 1977:
‘We had the great pleasure to entertain Frank Laffitte here on the 16th April. We had been asked to copy one of his Duo-Art rolls – Equinox by John Ireland – by Roger Buckley, Editor of the PPG Bulletin. Laffitte had heard about us through Frank Holland and had said he had wanted to meet us for a long time. Apart from wishing to meet us and see the [perforating] machine he was very happily agreeable to autograph each of the 18 copies. We presented one to him which we also signed although he does not have a reproducing piano.’ 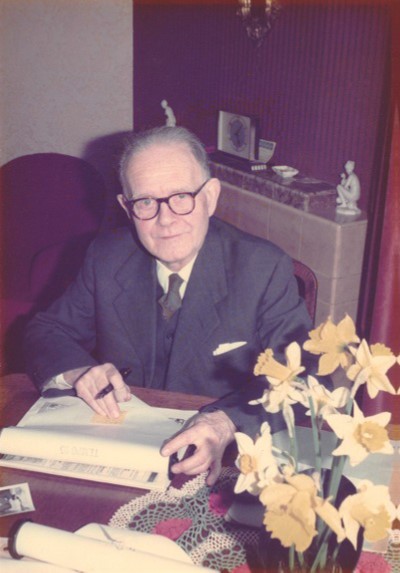 This was the first of a number of visits that Laffitte paid to Harry and Sylvia Medcraft in Harrow Weald. One of the most memorable took place on 2nd July 1977, the occasion of the Medcrafts’ annual PPG meeting. It was a beautiful day and the garden was looking its lovely best. In my review of the meeting (PPG Bulletin 66, p. 14) I wrote:
‘We [next] had a Golden Jubilee tribute to Frank Laffitte: one of the Medcrafts’ new copies of his recording of Equinox by John Ireland. One often feels like applauding a [reproducing] music roll, though it is illogical to do so – except on extremely rare occasions such as this when, gloriously, the artist was sitting in our midst, fifty years after recording the performance, and with the two daughters [Yvonne Hinde Smith and Vera Reade] of the man who was responsible for that recording, Reginald Reynolds, also present. The applause was heartfelt and prolonged.’

On another visit, which took place on 26th January 1980, Laffitte autographed copies of his Duo-Art recording of Dohnányi’s Rhapsody Op.11, No. 1 (Duo-Art 0351) and, at my request, re-autographed my original copy. 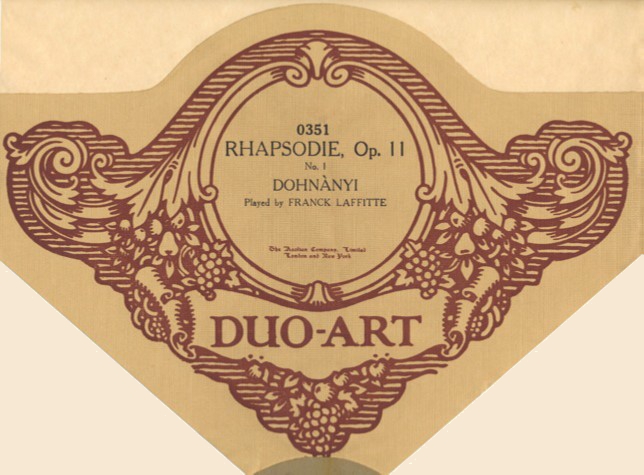 It will be noticed that when he originally signed the leader, the forename ‘Frank’ was given an extra ‘c’ (‘Franck’). It was not the idea of Laffitte, an extremely modest man, to embellish his name in this way, making it appear perhaps more European (and, who knows, even implying a connection with César Franck); the notion actually came from his Aeolian employers. He took the opportunity to set the record straight when, more than fifty years later, he autographed the roll again.